Guide to squid fishing in Melbourne 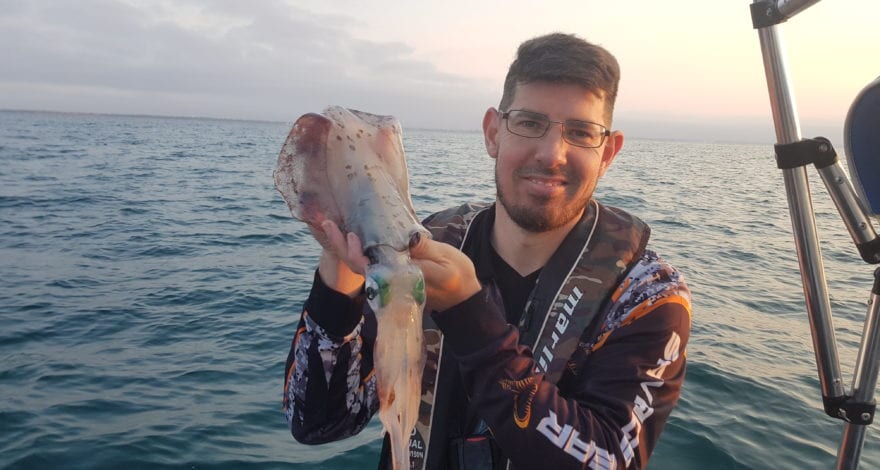 Guide to squid fishing in Melbourne

Squid fishing Melbourne Guide. What’s not to love about targeting squid around Melbourne or Victoria. It’s a great form of fishing that’s continually growing in popularity. Fresh calamari is just about as good as it gets from an eating perspective. Squid can be caught all year round, you will generally find them in shallow weedy areas and they respond really well to jigs in clear water conditions. Thankfully around Melbourne, there are plenty of locations for land-based anglers as well as boats and kayaks to get into the squidding action. We’re blessed to have perfect ecosystems such as Port Phillip Bay, Western Port, Corio Bay and Mornington Peninsula which all produce squid in good numbers.

Check out this recent video where I take a 12-year-old child and a beginner and teach them how to catch and cook squid.

Squid fishing truly is a unique style of fishing. You can throw a squid jig overboard and let the natural currents do all the work for you. Or you can flick and retrieve just like you would when fishing a soft plastic. Allowing the jig to sink for a few seconds then adding wild repetitive lifts to imitate a wounded prawn. Throw in some decent length pauses and that’s often a recipe for success. A big difference when squid fishing is about control when getting a hit. The natural temptation is to strike but doing so will often lose you a squid. Instead, a subtle lift to keep line tension and constant slow reel is all that’s required. It takes some practice to master but not too long to start gaining a good understanding.

Land-based squid fishing from jetties and rock walls has become very popular with local anglers. To have success with this form of fishing you will typically need a long fishing rod which will allow you to cast greater distances. These are generally between 8 and 9 foot in length. It’s also key to take a range of squid jigs in different weights and colours. Often you will need to cast far so jigs in 3 gram and 3.5 gram are great options if it’s not to shallow. Sometimes anglers attach a small lead sinker to their squid jig. Either a standard sinker attached to the front of the squid jig or lead moulded to the shape of the squid jig which slides onto the front of the jig. The theory behind this is to cast out further and get the squid jig down lower to the bottom where the action often is. When fishing a sandy bottom it also gives you more opportunities to throw in some erratic lifts followed by some pauses without getting snagged. I often choose just to throw out a heavier 3 or 3.5 gram which still managed to produce results. However, I was impressed with this technique which was working very well for those who look like that had been using this technique for some time.

Kayak fishing for Squid around Melbourne

Targeting squid via a kayak has quickly become one of my favourite forms of fishing. Surprisingly you don’t need to venture out too far to be in good squid grounds. Areas such as Mornington, Corio Bay, Queenscliff and Point Cook are great for kayakers looking to catch squid. Fishing from a kayak is unique as you can fish with 1 rod in hand and other rods in rod holders as you slowly drift along. Both can be successful. I’m always looking for shallow weedy areas and generally prefer going out on clear days with low winds.

Check out this video a master class on Kayak fishing for squid in Melbourne.

Squid fishing from a boat guide

Those with access to a boat are certainly lucky around Melbourne. There are many areas that consistently produce good numbers of squid. Most times of the year you will find me on my runabout boat in areas such as Point Cook, Queenscliff, Mornington, Wedge Spit, Kirks Point and Corio bay targeting squid. I’m always looking for shallow weedy areas and generally prefer going out on clear days with low winds. This way the water isn’t murky and squid seem to be more active. If your after some GPS coordinates to get you started then look GPS Coordinates to catch fish.

Check out this video we launch from Werribee boat ramp at head to Wedge Spit where we catch plenty of squid.

Squid fishing Melbourne Guide well popular areas include Rye pier, Mount Martha rocks, Port Welshpool long pier, Queenscliff, Frankston pier, Sorrento pier, Blairgowrie pier, Flinders pier and Portsea piers. Surprisingly these spots are often jam-packed at night with keen anglers travelling far and wide fishing through day and night. One particular night I arrived at Blairgowrie pier at 10.30 pm and could not get a spot on the pier which is a testament to how good the squid fishing is. Keep an eye on the wind and tidal changes, which will often encourage squid to migrate from one side of the bay to the other.

Some of our favourites have been the range of Yamashita squid jigs including the Egi-O Q Live and Sutte-R. The Shimano Sephia, Shimano Egixile, Gan Craft Egi-ya, Rui squid jigs, Daiwa Nudes and the Savage Gear egi shrimps. Do colours and sizes really matter that much? It’s a debatable topic that draws mixed responses. Some anglers argue that certain colours and shapes consistently out fish others. I have seen this firsthand on many occasions, or maybe the simple logical conclusion is that certain variables work on certain days depending on the weather and conditions there presented with. For example, recently I was on a boat with a couple of mates. I was using a 2.5 gram Yamashita live in black. The others using other brands and colours. I bagged out in 30 minutes and the others didn’t catch a single squid. They then changed to a black squid jig and too started catching. So maybe there is something to this after all.

At times its marketing hype that makes us more excited than the actual squid were targeting. I too get drawn into this hype and for whatever reason saw fit to stick with bright coloured jigs which worked a treat for me. Companies such as Yamashita have put some real science into selecting colours suitable for the time of day and conditions. Look that up online it’s quite fascinating.

Hopping technique – This is the most common technique. Simply cast your squid jig and wait a few seconds. Then do several quick erratic lifts wind in the slack. Pause for a few seconds to let the squid jig slowly sink once again. Repeat this process until your squid jig is back where you are fishing. The idea behind this technique is that you’re imitating a wounded shrimp or baitfish. Often as the squid jig is slowly drifting back to the bottom is when you get most of your catches.

The slow roll – Cast your squid jig then wait a few seconds for it to sink. Then simply do a slow continuous retrieve of your reel knows as the slow roll. This is a great technique to use when beginning.

The good thing about both these techniques is that there easy to learn and master, and very effective.

Check out this video recently recorded from Campbell’s cove on our kayaks catching squid.

It can be an overwhelming task to visit your local tackle store and select a squid jig. The choice of brands, colours, patterns, sizes, weights, rattles and UV glows are almost endless. For the most part weights of squid jigs start at 2.5 grams and go up to 4.5 grams. I have been sticking to brightly coloured squid jigs going with oranges, pinks and glow whites. Squid fishing Melbourne Guide

There are many great rod combos on the market specifically for targeting Squid. These are referred to as Egi combos and are built specifically for casting squid jigs. These rods are lightly tapered and offer superior sensitivity specifically for targeting squid. They are generally between 7 foot to 9 foot in length. The rod specifications will clearly outline what size jig heads there designed for casting. Example a recent rod I purchased was a 762 light. This means 7 foot 6 inches, 2 pieces and L stands for light. This rod clearly outlined it was designed for squid jigs between 2 and 3 grams. Casting heavier jigs in 3.5 and 4 grams would risk breaking the rod tip. When land-based fishing for squid a longer squid rod between 8 – 9 foot is ideal. 8 foot 3 inches is a popular length allowing you to cast long distances whilst having a nice action. When fishing from a boat or kayak shorter rod lengths between 6-8 foot are ideal.

I have recently been using the range of NS blackhole blackwater rods which have performed really well. Selecting the 7 foot 6 inch version when fishing from my boat and the 8 foot 3 inch version when fishing land-based. They’re a great mid-range option that I highly recommend. Let’s cover different budget options.  Entry-level egi outfits start around the $100 price mark. These might include the Rovex egi wrangler, Silstar egiist, Shimano Catana Egi CTA762MLEGI. Then slightly moving up the scale to a Shimano raider egi, Abu Garcia Veritas Egi Special or Savage Gear LRF. These are typically 3-6 kilo and well suited to a 2500 or 3000 size reel.

Then you can move up the budget scale to high-end options such as the Daiwa Emeraldas, Shimano Sephia, Calamaretti, Nitro custom, Major Craft Crostage CRX series or Samurai Egi outfits. These rods are of high quality but come with a fitting price tag. Prices ranging from $180 all the way to $600. These would be coupled perfectly with a 2500 or 3000 size reel. Many of the manufacturers having reels to match the rods such as the Emereldas reels and C14+ reels.

I love to catch and cook squid, but it has also become my primary source of bait. When making calamari the first thing I do is cut of the tentacles and store them away in the fridge. This becomes my continual source of fresh bait for my next fishing outing. Most fish love squid as bait this might include flathead, snapper, whiting, gummy shark and much more. Squid tentacles are a great option for bait as it stays on the hook and is a reliable choice for catching a few fish.

Yep, there seems to be a product for just about everything. One of the recent hypes is the Squid scent spray. Ecogear have developed an Egi Squid Scent Spray which suggests it can improve catch rates by 40%. That’s a bold claim but may be worthwhile giving a go if we can believe the marketing hype.  ( Day time Egi Max Scent ) ( Nighttime Glow Max Scent ).

The final word from the author

I love fishing and I’m happy catching any type of fish regardless of the size or species. I love targeting squid, there easily accessible, they’re great fun to catch and easily one of the best eating species to target. Remember to always check fishing regulations and catch limits in your area. Where possible practice catch and release you don’t need to hit your bag limits just keep a couple for a feed.

Thank you for reading our Squid fishing Melbourne Guide. If you have any further ideas then please share them by sending your ideas to reports@fishingmad.com.au or if you would like to send us pics of your kids fishing we would love to add them to the page.