Clifton springs
Cliffton springs have been fishing extremely well the past few weeks with reports of anglers bagging out on both whiting and squid in the shallows in around 2-4 meters of depth. For Whiting a lightly weighted paternoster rid baited with some pipi or freshly caught squid has been working best. and for the calamari white and natural size, 3.0 squid jigs should work well. Clifton springs have been a hotspot for whiting as well as squid, whiting has been present on a runout tide around about the 4-6 meter mark. The usual whiting baits including pipis, fresh calamari or a cocktail of both have been standout choices. The squid is lurking around the same areas as the whiting just in shallower water. Drifting in the shallows whilst working squid jigs has been a really effective way to catch them.
.
Corio Bay
the Corio Bay, the fishing has recently been fishing well, with large numbers of Australian salmon being caught all across the bay, with the waterfront providing the most of the activity. casting hardbodies and soft plastic among the schools should almost always result in a hookup. Pinky snapper and flathead have both been kicking around recently as well.
During the past month, the bay has been producing steady numbers of flatheads as well as small pinky snapper, as well as reports of schools of  Australian salmon chasing baitfish on the surface. plastics such as zman grubs, slimswimz and gulp turtleback worms have been proving to be a great choice. Recently the bay has been fishing relatively well, With the Geelong waterfront producing some quality pan-sized pinkies, as well as flathead, salmon, mullet and the occasional whiting. These fish have been taken on a range of lures and baits such as grub and worm style soft plastics and baits such as pilchard, squid and chicken. Land-based anglers have also been getting in on the action while fishing areas such as Cunningham pier, Wangim walk and st Helens. The southern Calamari are still present along with the shallow parts of the bay such as Clifton, with natural coloured jigs providing the most action.
.
Barwon river
The Barwon river fishing has been extremely slow as the water temperature has started to cool down, however catching a carp on unweighted bread or corn is still possible if you persist. The Barwon river has been hit hard with rain and as a result, the water levels have risen and the water clarity, as well as temperature, has decreased drastically these factors have caused lure fishing to be very tough going. however, the carp were still easy enough to catch on unweighted bread and corn. The river is starting to clear up and should produce some redfin and estuary perch in the coming weeks.
In the last few weeks, the Barwon river has gone from producing many redfin and estuary perch and even the occasional native consistently to being a very slow fishery due to the rains causing the water levels to rise and the clarity of the water to become a lot poorer. Before the rain’s anglers were able to catch redfin and estuary perch on a range of lures including grub and paddle tail soft plastics, small hardbodies and surface lures such as bent minnows and cicadas. Carp have also been biting well on unweighted bread, topwater lures and even fly in all parts of the river, but the rowing club has been a hot spot.

David le with a squid from Clifton springs 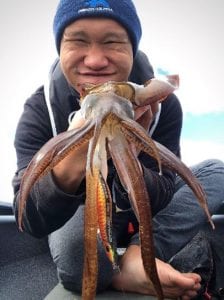 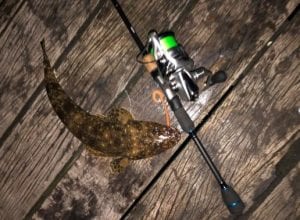 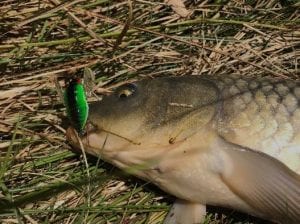 Small redfin caught on a bent minnow near queens park 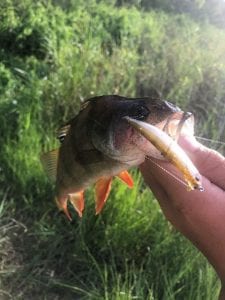