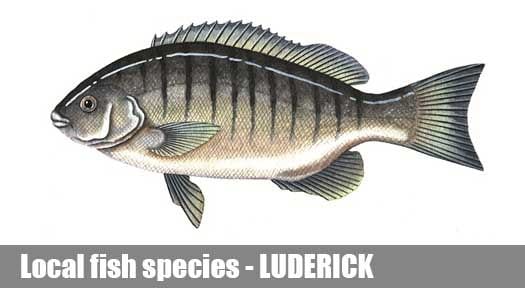 Welcome to the Luderick Fishing Guide Victoria covering local fish species facts and Limits. Luderick is an underrated fish often caught as bycatch when targeting estuary species such as bream and estuary perch. They have good fighting and eating qualities, most caught locally are quite small but are known to grow up to 60cm. They look amazing with black vertical stripes over their silver body that resembles a zebra or drummer fish. Luderick is strong fish and surprise anglers who were expecting to see a big bream at the end of the line.

Luderick has a scientific name of Girella tricuspidata. Their minimum legal size limit of  23cm, with a daily bag limit of 10. Most caught locally are quite small but are known to grow up to a whopping 60cm.

How to catch Luderick

Luderick will school up in big numbers particularly around areas with heavy weed, reef or rocks. Considered the vegetarians of estuaries Ludericks will surprisingly take staple baits such as sandworms, prawns, yabbies, bread or weed from the surrounding areas. These baits should be suspended from a float or running sinker rig. Berleying an isolated is recommended to encourage them into the area and get them into feeding mode. Whilst not as common Luderick can also be tricked into taking lures such as worm and prawn imitation soft plastics, blades and shallow diving hard body lures. For Luderick we recommend a light 1-3 or 2-4 kilo spin rod around 7 foot in length. Coupled with a light 1000-2500 size reel, spooled with 4 pound or 6-pound line and leader.

Surprisingly the best bait for targeting Luderick is using the same weeds within the area. Weed was recently collected, and neatly suspend using a simple rig with a float, some split shots and a size 6 or 8 hook. Presenting weeds on a fly rod “Weed flies” is another very effective method. You can get clever and make lures out of weeds but if your are specifically targeting Luderick then your best-using the methods suggested above

Luderick can be caught all year round but they are most active between the warmer months of November through to February. They respond to strong current flow and are also most active just after the peak of each tide. Luderick like shallow areas with plenty of weed and rock for them to hide and feed.

Check out our massive fishing locations guide for Viucotira covering 200 destinations that you could fish at.

Images of fish supplied VFA and DEPI. All other images and videos shown on the Luderick Fishing Guide Victoria are Fishing Mad originals.

Additions or Corrections for this fish species

Thank you for reading the Luderick Fishing Guide Victoria. If you feel this guide is missing key information or needs any corrections. Then please let us know by emailing our team at enquiries@fishingmad.com.au with specific details in the email. Thank you