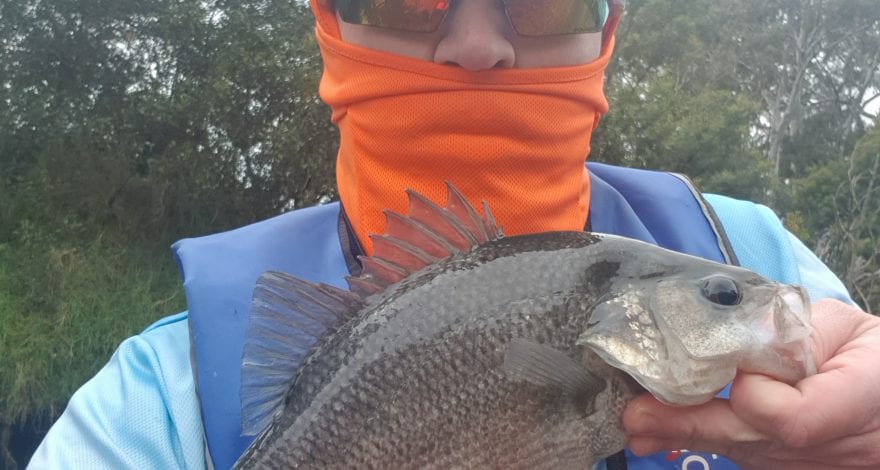 Werribee River Estuary Perch Fishing report by Steve Vessy ( Fishing with Steve ). Well, it’s been a long time in lockdown, but this past month we have been released with a 5km radius from our homes or workplaces, after having a look at Google maps I figured the only place I can legally fish is the mighty Werribee river freshwater section, Having fished here many times over the past few years I have picked up the odd redfin here and there but never really had much luck with anything else. The first chance I had to get down to the river I locked it in and got the kayak ready for my 2-hour session on the water and boy was it a good one.

The Werribee river freshwater section has 2 launching spots above the weir for the avid kayak angler, the 1st being just about 300 meters above the diversion weir at the Riverbend historical park. This spot has its pro’s and con’s, you have to walk about 100 meters from the car with your kayak, when the river is low there is about a 2-3 foot drop, But….. It is close to the weir and the area just above the weir is some of the most productive areas in the river to fish. If the water level is down below the weir wall, the area has shallow weed beds and shallow banks, the idea is to find the areas just at the edge of these weed beds and either uses shallow divers or Soft plastics with very light jig heads. I have found when fishing this area if you get your lure into the snags, you’re in for a chance of hooking onto one of the glorious Estuary Perch that Vic fisheries stocked into the river a few years back now. The area is also a hotspot for surface lures either just after dark or just before sunrise.

The 2nd launching spot is more of a mud ramp that you can literally slide your kayak into the water and it is fairly easy to retrieve. This spot is roughly 1.7kms upstream from the weir and is easily accessible as well as being closer to the water, The only issue with this ramp is there is not a lot of parking so it’s pretty much parking on the road or just up on the gutter a little bit. To get to this spot, go down Riversdale drive in Tarneit and you will see a single parking bay, just beyond this towards the water is the ramp so to speak.

4 trips in 10 days is how my re-introduction to fishing started back up after the Covid lockdowns, I had a range of soft plastics and hard bodies from the last few months of Tackle club subscription boxes as well as a handful of Savage gear fat head cranks in 3.8cms and a range of colours. The first trip to the river was a glorious 24 degrease but the wind was blowing, I was targeting anything that was willing to take my offerings, after a few casts into the snags and not having much luck I changed lures and put on something a little bit different, This lure I would never even look at in a shop as it just doesn’t appeal to the style of fishing I do, But the Damiki Monster Miki 2.5in is similar to the strike tiger nymph and fishes the same way, So I rigged it up with a 1/16 ounce jig head and found a shallow weed bed between to stumps and cast my line in. Now this style of fishing you have to be patient as the light jig head takes a bit of time to get to the bottom, Once on the bottom short little twitches of the rod tip is all this lure needs to get some action on the little feelers and legs, after peppering the area with fanned casts I hit the jackpot and in the yak came the first Estuary perch of the day measuring in around 24cms, so not a monster by any means but the 1st fish in nearly 3 months bought some joy to this avid angler and video blogger, At last, I had the startings of a new video for the “Fishing with Steve” YouTube channel which due to the lockdowns had almost become stagnant. Pictures were taken, hooks out and the fish was released to grow bigger. Knowing that these fish school up I thought why not try again and 2 casts later I had the 2nd fish of the day, measuring around the same size as the first fish it was released to fight another day, 5 more casts and 2 more fish had my total at 4 in 20 minutes all around the same size. All caught on this creature bait style plastic called a Damiki Monster mini.

A few days later back down to the river I go, Using a lighter rod and reel with 4lb leader I was a little hesitant as the snags are a shocker in the river and I have lost count as to how many lures I have lost to the Werribee river,  Launching at my normal spot (spot 2) I headed around the bend and started flicking the savage gear crank into the bank and bringing it out through the snags to the middle of the river, 5 minutes I had been in the river about 10th cast in, had the lure almost back to the kayak, leader was in the 1st two eyes of the rod and BAM ! the drag started screaming and I was getting towed around the river by (in the Werribee river standards) a slob of a perch, after a few minutes of fighting the beast, I caught sight of the fish and what a glorious fish it was, glistening silver and fat measuring in at 34cms this fish has been eating well, released to fight another day and I was on top of the world, not even 10 minutes in and I had caught the 1st fish of the day, I had a few more casts into the area but produced nothing else, So downstream I paddled towards the area from a few days earlier, I tried another one of the plastics from the Tackle club box this time a Noike 3 inch paddletail in like an olive green and white colour, same size jig head and in went the cast, nothing, not even a bump, 4 casts in and still nothing, maybe the fish aren’t here I thought, Then I realised I forgot the scent, out comes the gulp gel on it goes then sure enough 1st cast bang, fish on. Another 24cm fish. A few more casts with the paddle tail and no action so Back to the Damiki Mini and sure enough another 2 fish from the same snag in a matter of 5 minutes.

Another few days pass and the Werribee River is calling me once again, So I oblige.

The first thing I notice when launching my yak is the water level has risen about 3 foot and is spilling over the weir wall, Right there I knew it would be a hard session, I have found when fishing the river if the water level is up and is flowing over the weir the fish tend to shut down and become a lot harder to catch, I persevered and put in the hours fishing all the same spots from the previous sessions but to no avail, tried almost every plastic in my tackle box and lost that many to the snags of the river it was becoming a joke, So I paddled further down stream towards the weir and worked a weedy back, Bump, Bump hmmm I thought, So in I went for another cast, Bump Bump again but no take on the noike paddle tail, on went the nymph and sure enough, pulled the fish out of the snag, almost fishing it like bait and just letting it sit there like a worm on the bottom was enough to entice the bite, No more hits from that snag so I moved on to a spot on the river, Some local yak anglers might know it, There is 2 big trees in the middle of the river it’s about 15ft deep between them and I have caught fish here before, So over the leg went to hold me in place and I work this area with the plastics, It takes so long for a 1/20th once jig head to get to the bottom as that’s all I had left, But Sure enough as I was working the lure back to the kayak it got hit and in came the 2nd fish for the morning. This was my 2 hour time limit done and dusted so I packed up and went home after a very hard days fishing.

All in all the Werribee river is fishing reasonably well through spring and coming into summer it’s only going to get better as the water begins to warm up, There are reports of fish even getting caught off the surface for those putting in the leg work and getting out. I would suggest to those wanting to fish this river If the river is flowing and its dirty, fish with bait, If it is a bit clearer and the water level down goes with lures, The Werribee River is slowly producing some quality Estuary perch and over the next few years it is only going to get better as the fish get bigger and the golden perch that were stocked into the Melton reservoir start filtering down into the lower system.

Thanks to Vic Fisheries for the stocking program and making this waterway such an awesome place to fish.