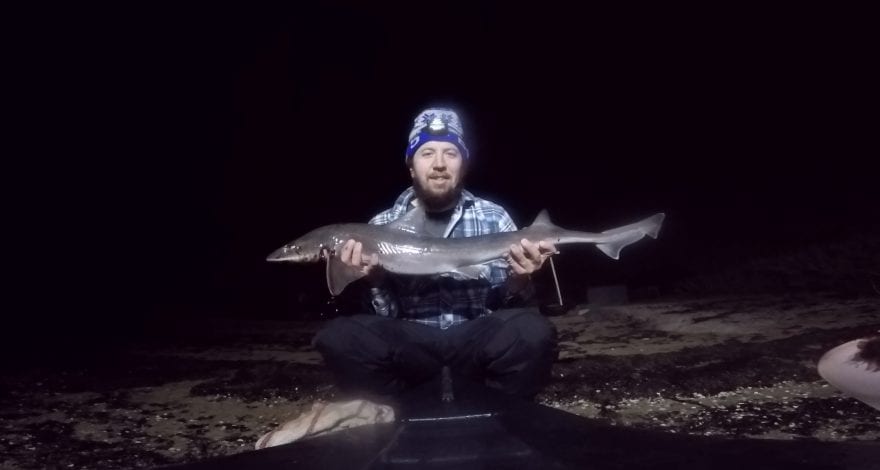 Steve Vessy from Fishing with Steve has had some exciting times targeting Werribee South Gummy Sharks. on Friday 15th launched from Werribee South at 3 pm. It was low tide making him have to drag the kayak over 50 meters of sand. This was made much worse as he had accidentally left his kayak wheels at home. He finally hit the water and paddled out to 5 meters deep. Then started berleying up hard. Tide was on the rise the weather was fairly warm considering the time of year. It didn’t take long for the 1st fish to show up the first gummy was on the board, only a pup so was released to grow a bit bigger.
Not too long after he managed to get the 2nd and 3rd catch within minutes. But finally just after dark that the biggest rod buckle happened. The reel started screaming, after keeping the shark away from the berley line and the anchor line. Steve managed to get it into the yak, biggest of the night going 75 cms from head to tip. He managed to catch 5 all up for the night and kept one for a feed, Also managed to get 2 flathead as a by-catch.
He wasn’t done giving it another crack on Friday 22nd. This time he hit the water a bit later launching at 5 pm. The tides were the opposite to his previous outing. An outgoing tide and a lower temperature, not a breath of wind and no boats anywhere within site. Steve had his electric motor fitted this time and headed out into deeper waters than normal by kayak getting to 6 meters deep before dropping the anchor. He started berleying and cubing with pilchards. after the first 30 minutes of no activity. Contemplating a move and pulling in the berley pot the first rod buckled and sure enough, the first gummy pup was on the board again. Only a small one so he went back. No keen for another he started berleying hard but only caught 1 flathead in the next hour. It was just about time to give up and call it a night (that’s what he thought)….
In came the berley pot, In came the 1st rod and as I was tidying up the yak, BANG! the 2nd rod started screaming and something was peeling line off the reel at high speed, After a few intense minutes the beast had succumbed to the fight and up from the depths came his PB gummy from a yak measuring in at 1 meter and just under 3.5 kgs. Well done a great effort.
The gear and tackle used included the following. Bait was squid and pilchards both purchased locally from Hooked on Bait and Tackle. 20 LB braid with 20 LB mono home made paternoster rigs with 4/0 circle hooks. Jarvis walker rods paired up with Shimano sienna 4000 reels, Also used My ABU garcia promax 3500 combo. Werribee South Gummy Sharks