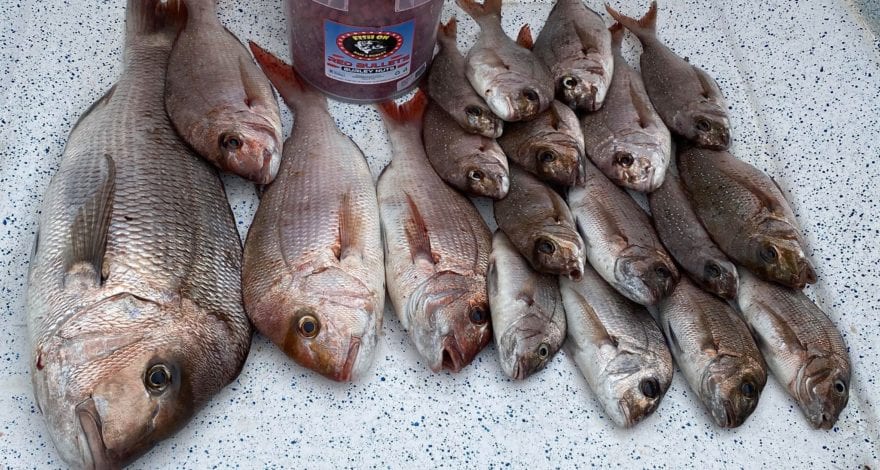 Williamstown snapper fishing report. Its been a slow start to the snapper season this year. Water temperatures which are well below normal for this time of year have the season a little delayed. Generally when the water is around 17 degrees is optimal for snapper fishing. However, we are almost at the Melbourne cup weekend and we still have some catching up to do. The week prior to Melbourne cup we headed out from the Altona boat ramp and fished opposite the Williamstown football ground.

The winds and swell were low but the rain was high and it rained for the majority of the morning. We were completely drenched by 6am but soldiered on. Thankfully we did as the snapper fishing was amazing. There was 3 of us on board. Collectively we landed several snappers up to 80cm and many good size pinkies. At first, they were landed on staple dead baits including pilchards and silver whiting. Taken on double snelled rigs and single 5/0 and 6/0 rigs. But once the bite got hot we switched to 4 inch curly tails and octopus jigs which also accounted for many snapper. This is an awesome way of fishing targeting pinkies and snapper on light spinning gear and soft plastics. It was a tough day weather-wise but the fishing was exceptional and well worth the effort.

Snapper fishing for Melbourne should really start to be great from this point. It has been a slow start to the season but things are just heating up. Look forward to many more fishing reports and videos to come.

You can read more about fishing for snapper this season by reading our Snapper guide for 2019 This article contains lots of tips and techniques to help you catch a big red or town around Port Phillip Bay and Western Port this snapper season.